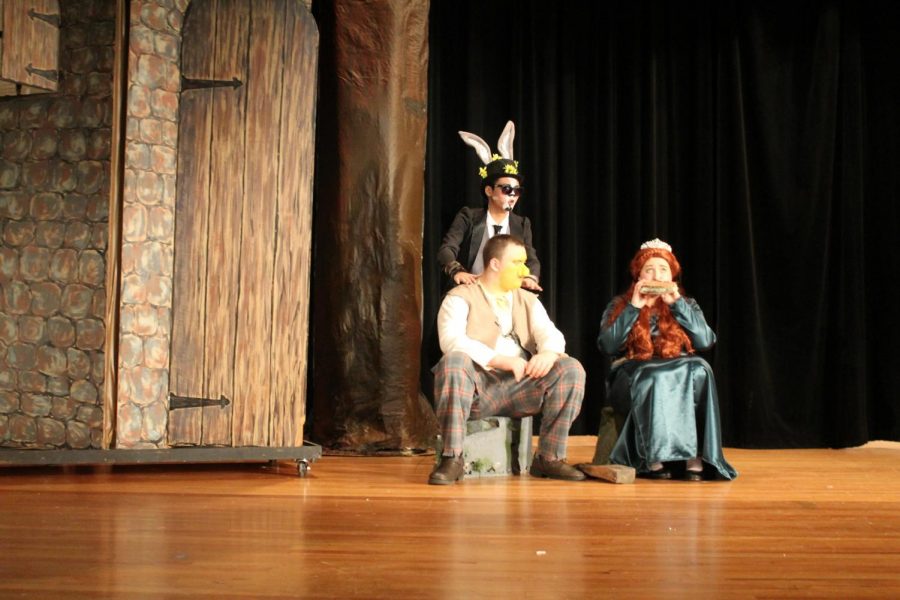 The theater department has been working on their first play of the school year, Shrek the Musical, since September. Rehearsals started out in the choir room, as the cast learned the songs and harmonies. Now the cast has put on their first show, and they’ve prepared for the rest which will be on  December 13, 14.

“I’m really excited for our performances,” senior Madison Celley said. “It’s the first time in a while that we’ve done a well known musical, and I’m really looking forward to the outcome.”

Putting this play together took many long, after school rehearsals, an eight hour work day over Thanksgiving break, weeks of prop and set-building in class, and hours of time working through tech issues.

“I’m in charge of sound which entails making sure all mics are working properly, adjusting the mic volume for each character, and controlling the music for the musical as well as different sounds such as Pinocchio’s nose and the dragons roar,” senior Marcos May said. “I figured out out how the mics and sound equipment work, since they’re prehistoric, and making sure all the sound cues and music blend well with what is happening in order to form a cohesive performance is a big challenge.”

In addition to rehearsals, the cast members put in hours of individual work in and out of school to get their lines and songs down.

The cast spent a lot of time together, helping each other figure out their roles and singing parts.

“For my singing part, our lead and I went to the bathroom everyday for a week or two and just rehearsed our song over and over,” junior Rachel Bowman said.

The cast faced many challenges and setbacks. They had to learn to be flexible and problem solve.

“I think things are coming together,” Bowman said. “They always do; that’s just how theatre works. No matter how bad it seems right before a show, the show itself ends up being better than you would expect. It’s always been that way in theatre and that’s solely because we know how to work together when it matters.”

Students and the community can go see the final two musical performances tonight and tomorrow. The play starts at 7 p.m. Tickets are $5 for adults, and $3 for students, faculty, and children.

“People should come see our production because the theater department has worked so hard to put it together and create one of the most intricate theatrical displays at Kilgore High School,” junior Brooklyn Hall said. “Besides the obvious set pieces that set our production apart from the past productions, our class has perfected new makeup techniques and prop-making skills that will benefit future projects.”